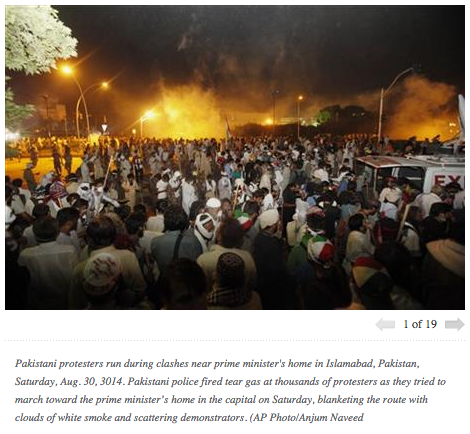 By ZARAR KHAN and ASIF SHAHZAD

ISLAMABAD (AP) — Hundreds of people were injured as Pakistani police battled throngs of protesters demanding the resignation of Prime Minister Nawaz Sharif with tear gas, batons and rubber bullets outside the prime minister’s official residence and the adjacent parliament building.

After a night of clashes, protesters started regrouping at daybreak Sunday and made repeated attempts to make their way through heavy deployment of police and barricades to reach the premier’s residence. Police strengthened their lines and responded by lobbing tear gas canisters.

Scores of protesters, including women, carrying hammers and iron rods broke down a fence outside the parliament building, enabling hundreds of people to enter the lawns and parking area, according to an Associated Press photographer at the scene and Pakistani television reports.

Islamabad police chief Khalid Khattak said the protesters were armed with big hammers, wire cutters, axes and even a crane.

Defense Minister Khwaja Mohammad Asif said police later managed to clear most of the protesters from the parliament building’s parking area and lawns.

“Now only women and children are there, and they can take shelter there as long as they want,” he said.

More than 300 people — including women, children and police officers — were admitted to two government hospitals in the Pakistani capital, medics and police said. The injured had wounds from tear gas shells, batons and rubber bullets, said Dr. Javed Akram, who heads the capital’s main hospital.

Akram said 182 injured were treated at Pakistan Institute of Medical Sciences. He said 37 police officers were among the injured.

Another 152 were brought to a government hospital near the scene of the clashes, said another physician, Dr. Tanvir Malik.

The protest leaders, cricket-legend-turned politician Imran Khan and anti-government cleric Tahirul Qadri, had called on supporters staging a sit-in for days outside the parliament building to march on the prime minister’s residence and the legislative chamber. About 20,000 police in riot gear were deployed to block the procession.

In speeches, Khan and Qadri called for protesters to remain peaceful and urged security forces to restrain from using force. Protests demanding Sharif’s resignation were also taking place in Lahore, Karachi and other Pakistani cities, according to TV reports.

Khan described the police action against the crowd as illegal.

“Now we will show this government. We will call for countrywide agitation and we will jam the whole of Pakistan,” Khan said.

Sharif’s spokesman Asif Kirmani said the government had to use force after protesters tried to attack the center of state power in the capital. Kirmani said that Sharif was not at the residence during the protests, but was at his ancestral home in the eastern city of Lahore.

“A state can’t be left at the mercy of some thousand people,” Kirmani said in an interview with Geo News TV.

Khan said the government’s action against the peaceful protesters caused chaos in the country.

Asma Jehangir, a human rights activist and political commentator, urged the government to take necessary measures to protect women and children in the protest, but criticized protest leaders for claiming that the demonstration would remain peaceful.

“It is like if you say ‘a peaceful robbery'” she said.

Khan and Qadri, a dual Pakistani-Canadian citizen with a wide following, allege that Sharif won the 2013 election due to massive voter fraud and should step down. They also have demanded reforms in Pakistan’s electoral system to prevent voter fraud.

Backed by parliament and many political parties, Sharif has said he will not step down. Government negotiators have tried to convince Qadri and Khan to end their protest.

The protests began with a march from the eastern city of Lahore on the country’s Independence Day, Aug. 14, that reached Islamabad a day later. Khan and Qadri had called for millions of protesters to join but crowds have not been more than tens of thousands. The protesters’ presence and heightened security measures have affected life and badly harmed business in the capital.

The protesters initially camped at another thoroughfare, but moved outside the parliament on Aug. 19. Until Saturday, the rallies had remained festive, with families picnicking and men and women dancing to drums and national songs.

Riot police initially showed restraint during Saturday’s march but when the crowd started removing shipping containers used as barricades, they fired salvos of tear gas canisters that forced the crowds back. TV footage showed protesters, including women and children, scattering in retreat. Some fell to the ground and many protesters, including several children, were shown in TV reports being treated for the effects of tear gas.

“In the given situation, police will arrest who so ever found creating trouble,” said Khattak when asked whether Khan and Qadri was to be arrested. “No one is above the law.”

Police refused to give any estimate about the size of the crowd that had been headed toward the prime minister’s residence.

“They fired tear gas shells at us,” said Ahsanullah Fakhri, 28, who was bleeding from his leg as he exited an ambulance with other injured protesters. “I think they are also firing some bullets, I think rubber bullets,” he added.

“A group wanted to capture the prime minister’s house and other buildings. We are under oath, and the police as well, to protect the state assets,” he told reporters at the scene.