Was Malaysian Airlines MH-17 ‘ACCIDENTALLY’ Shot Down Over Ukraine? 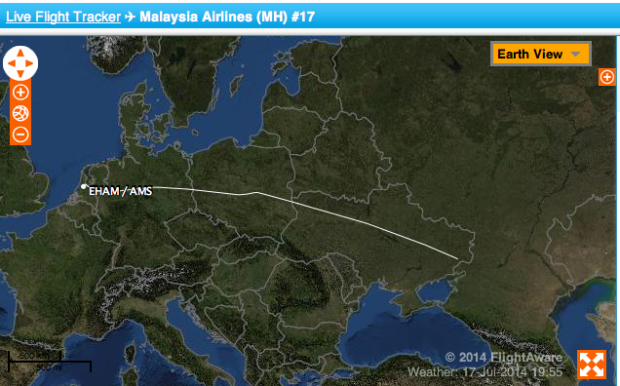 Was Malaysian Airlines MH-17 ‘ACCIDENTALLY’ Shot Down Over Ukraine?

While it is too early to know who shot down Malaysian Airlines flight MH-17 over Ukraine yesterday – and while it could have been a false flag –  it would be good to remember that airlines have accidentally been shot down numerous times in the past.

After all, the Malaysian airlines plane was way off course:

The plane flew over a war zone, which was well-known to be a “no fly zone” with “restricted airspace”.

Malaysia Airlines Flight 17 was cruising just 1,000 feet above restricted airspace when it was struck by a missile in Ukraine’s Donetsk region, according to aviation and intelligence officials.

Despite ongoing violence in eastern Ukraine, including the recent downing of two military aircraft, Ukrainian aviation officials had closed the region’s airspace only below 32,000 feet in altitude.

The Boeing 777, en route from Amsterdam to Kuala Lumpur, the Malaysian capital, with 298 people aboard, was at 33,000 feet when it vanished from radar screens, according to European aviation authorities.

In recent days, though, military aircraft were downed by antiaircraft munitions, which should have concerned aviation authorities, he said.

Malaysia Airlines filed a flight plan requesting to fly at 35,000 feet throughout Ukraine airspace but was instructed by Ukraine air traffic control to fly at 33,000 feet upon entry ….

CBS writes in an article entitled “‘Big Question’ Is Why Plane Was Flying Over War Zone”:

During a phone interview with CBS News Thursday morning, Captain Capt. Chesley “Sully” Sullenberger was questioned why Malaysia Airlines flight 17 would be flying over Ukraine’s border with Russia despite ongoing political unrest in the area.

Sullenberger, the veteran of the 2009 Miracle on the Hudson landing, is an aviation expert for CBS News….

“That is one of the big questions right now,” said Sully. “The U.S. Federal Aviation Administration has barred U.S. Airlines from flying over this area for some time.”

The Atlantic points out:

Did aviation authorities know that this was a dangerous area?

Yes, they most certainly did. Nearly three months ago, on the “Special Rules” section of its site, the U.S. Federal Aviation Administration put out an order prohibiting American pilots, airlines, charter carriers, and everyone else over whom the FAA has direct jurisdiction, from flying over parts of Ukraine.

Qantas hasn’t used the route for a few months, said Andrew McGinnes, a spokesman for the Australian carrier, while Hong Kong-based Cathay Pacific said it has been detouring for “quite some time.” Korean Air Lines Co. and Asiana Airlines Inc. said in statements they have been avoiding the area since March 3.

This is not the first time such an incident has occurred …

Numerous Previous Accidental Shootdowns … By Russia, Ukraine, and Other Countries

In 1954, mainland China’s Army shot down a Cathay Pacific Airways airplane, killing 10 out of the 19 passengers.   Cathay Pacific was the airline of Hong Kong, then under British control). In apologizing for the attack to Britain, the Chinese government said that they had thought the plane was a military aircraft from the Taiwan on an attack mission.

In 1973, a Libyan Arab Airlines Boeing 727 flying from Tripoli to Cairo got lost and flew over the Sinai peninsula,  under Israeli control since the Six-Day War in 1967. After giving signals to land and firing warning shots, Israeli jets shot down the plane, killing 108 of the 113 people on board.  The chief of staff of the Israeli armed forces took responsibility for ordering the shoot-down, the Defense Minister called the event an “error of judgment”, and the Israeli government compensated the families of victims (Libya condemned the attack as “a criminal act” while the Soviets called it a “monstrous new crime”).

In 1983, a Korean airlines passenger airline was shot down by a Soviet pilot killing all 269 passengers.  The pilot had accidentally deviated from the normal flight path:

The Soviets believed it was likely a military aircraft. Transcripts quote the shootdown order from Soviet General Kornukov:

What civilian? [It] has flown over Kamchatka! It [came] from the ocean without identification. I am giving the order to attack if it crosses the State border.

A U.S. warship fighting gunboats in the Persian Gulf yesterday mistook an Iranian civilian jetliner for an attacking Iranian F14 fighter plane and blew it out of the hazy sky with a heat-seeking missile, the Pentagon announced. Iran said 290 persons were aboard the European-made A300 Airbus and that all had perished.

Ukraine admitted to accidentally shooting down a Russian airliner in 2001, killing all 78 on board as the aircraft plunged into the Black Sea:

Ukraine finally admitted yesterday that its military shot down a Russian airliner that crashed into the Black Sea last week, killing all 78 passengers and crew.

Evhen Marchuk, the chairman of Ukraine’s security council, conceded that the plane had probably been brought down by “an accidental hit from an S-200 rocket fired during exercises”.

And – according to several government investigators tasked with determining what happened – an American missile test which went astray may have accidentally brought down TWA 800, killing all 230 on board.