Obama Vacations As The World Burns 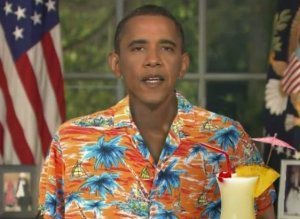 When it comes to mocking president Obama, there is no easier or more effective way than focusing on his vacation/golfing schedule. The conservative Washington Examiner did just that last week, before the latest Malaysian Airlines disaster, when it reported that “It’s going to be hot tubs, basketball, tennis and golf for the first family this summer, having set plans for a 16-day vacation in Martha’s Vineyard, Mass., on a $12 million, 10-acre forested estate on the southwestern corner of the island.

Reports from the Bay State indicate that President Obama and his family will vacation August 9-24 at the 8,100-square foot, beachfront home of a Democratic donor that includes a pool, hot tub, basketball and tennis court. It will be new digs for the first family, who have summered on tony Martha’s Vineyard every year of Obama’s presidency, except in 2012 when he was running for reelection. The Vineyard Gazette reported that the White House has no major or public events planned for the almost three weeks, typical at this stage of a presidential vacation.

That and golf of course.

However, all of that is to be expected, and sure enough, Obama can and will parry such mockery as political attacks coming from the right, while remarking how strong the US economy has become under his watch, how many millions of waiters and bartenders thousands of manufacturing jobs he has created, and of course, how the stock market hits a record high now on a daily basis.

Things get dicier, however, when Obama is mocked and virtually attacked for his vacation plans by none other than that flag-bearer of leftist ideology, the New York Times itself. Which is precisely what just happened in “Sticking to His Travel Plans, at Risk of Looking Bad“

As smoke billowed from the downed Malaysian jetliner in the fields of eastern Ukraine on Thursday, President Obama pressed ahead with his schedule: a cheeseburger with fries at the Charcoal Pit in Delaware, a speech about infrastructure and two splashy fund-raisers in New York City.

The potential for jarring split-screen imagery was clear. Reports of charred bodies and a ground-to-air missile attack from Eastern Europe dominated television screens while photographers snapped pictures of a grinning Mr. Obama holding a toddler at the restaurant. The presidential motorcade was later filmed pulling up to Trump Place Apartments, the Riverside Avenue venue for his first fund-raiser.

And yet, White House aides said no consideration was given to abandoning the president’s long-planned schedule, even during the hourlong flight from Delaware to New York, when word suddenly arrived that Israel had begun a ground invasion of the Gaza Strip, providing the day’s second international challenge.

Instead, White House officials simply made sure to describe the president’s on-the-road management of the crises: calls to world leaders from Air Force One, telephone briefings from Secretary of State John Kerry and a secure-line meeting of his national security staff from a room in the Trump Place Apartments before his fund-raiser.

“It is rarely a good idea to return to the White House just for show, when the situation can be handled responsibly from the road,” said Jennifer Palmieri, the White House communications director. “Abrupt changes to his schedule can have the unintended consequence of unduly alarming the American people or creating a false sense of crisis.”

Actually, that is somewhat correct: it has gotten to the point where seeing Obama actually work in the White House, instead of golfing of shaking hand with the same Wall Street bankers his DOJ pretends to prosecute, would create a “sense of crisis” among the American people. Not so sure about be “false” part.

And this is where things got rough:

For an administration in its sixth year, juggling presidential optics is nothing new. And with some rare exceptions, the public relations team around the president has remained consistently stubborn about refusing to let the never-ending stream of political, economic or international crises affect Mr. Obama’s daily schedule.

The current myriad incidents are no exceptions: Moments after making a grim statement about Ukraine on Friday, the president popped into the East Room, where the first lady, Michelle Obama, was holding a mock state dinner for children to promote her Let’s Move nutrition initiative. “My big thing,” he confessed to the kids, “chips and guacamole!” There was plenty of laughter all around.

To be sure, conservatives promptly ridiculed the president for what he does best: put on a great show before the teleprompter then quietly disappear in the golf cart. As noted above, this is nothing new and the administration felt no need to defend itself.

“Instead of responding to multiple international crises, the president apparently thought it was a better use of his time to attend a set of fund-raisers in New York,” Representative Kevin McCarthy, Republican of California and the incoming majority leader, said in a statement. “While the president is out on the loose and having a good time, he should remember that his responsibilities as commander in chief don’t stop when he’s out of the office.”

However, by now even the ubiquotous social media is starting not only to noticed, but to comment:

Administration officials shrug off that kind of organized Republican criticism. But social media users noticed, too. Twitter was filled with snarky mentions of the president’s activities on Thursday. One noted that Mr. Obama “interrupts busy fund-raising night to check in with team on two crises. Then back to business.” Another wrote: “Nice he could take a moment to check on those meddling world events.”

Obama won’t be the first president to see his reputation tarnished by his vacation plans:

Veterans of previous administrations recalled that the political damage could be serious if the American people concluded that the president was politically tone deaf or insensitive, especially to the suffering of others during an emergency.

Scott McClellan, who served as George W. Bush’s press secretary during Hurricane Katrina, recalled that Mr. Bush, on a trip through Western states, was photographed strumming a guitar with a country music artist even as the storm began to bear down on New Orleans, flooding streets and stranding residents.

“When those moments are placed side by side with a crisis that’s worsening, it creates a perception problem that the White House can’t ignore,” Mr. McClellan said in an interview.

In his book “What Happened,” Mr. McClellan recalls with horror seeing the “image of a seemingly carefree President Bush pursuing his original schedule and disregarding the plight of Katrina’s victims — the dead, the homeless, the lost.”

Later, Mr. McClellan writes: “With 20/20 hindsight, it’s clear that President Bush should have canceled his two-day western trip and headed back to Washington on Saturday or Sunday, before Katrina unleashed its fury.”

“There is a total lack of symmetry from what the American people are seeing from the president and what is going on in the world,” Mr. Schmidt said. He acknowledged that no president should be captive to events or hunkered down in the White House. And he said presidents, like other people, deserved downtime. But he said White House occupants had to abandon those moments when the situation demanded.

Will this time be any different for the tone deaf president, and will the first observation of Obama’s vacationeering by a liberal outlet force him to change his ways? Or does the world have to finally succumb to at least one mushroom cloud beside the countless fires raging across the globe, before someone in the White House notices? We should find out… but not before Obama comes back from Martha’s Vineyard on August 24. Let’s just hope that no major wars break out over the next month.