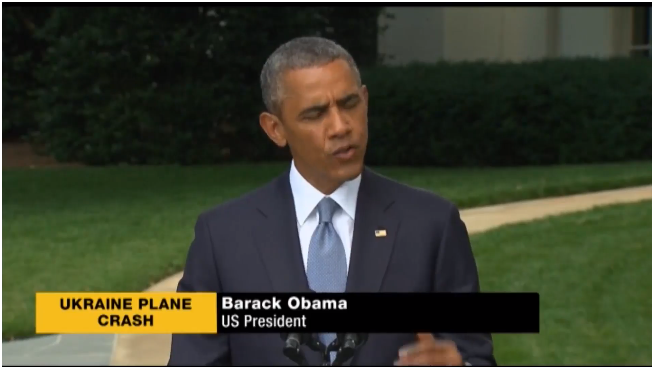 Obama: Costs for Russia will continue to increase over Ukraine crisis

“If Russia continues to violate Ukraine’s sovereignty and to back these separatists,” President Obama said on Monday, then the country will “further isolate itself from the international community and the costs for Russia’s behavior will only continue to increase.”

The US president also urged his Russian counterpart to compel the forces in Ukraine to stop hampering the probe at the crash site of a Malaysian airliner.

The passenger jet was shot down on July 17 and all 298 people on board were killed.

“Given its direct influence over the separatists, Russia — and President Putin in particular — has direct responsibility to compel them to cooperate with the investigation,” he said.

“That is the least that they can do.” Obama said. “This is an insult to those who have lost loved ones. This is the kind of behavior that has no place in the community of nations.”

“Our immediate focus is on recovering those who were lost, investigating exactly what happened and putting forward the facts,” Obama said. “We have to make sure the truth is out, that accountability exists.”

Meanwhile, President Putin in a brief statement on Monday said that investigators must have access to the crash site.

The White House has been accusing pro-Russian fighters in Ukraine of shooting down the Malaysian plane. However, Obama offered no new evidence over the accusation.

The Obama administration has also been pressing the European Union to ratchet up economic sanctions on Russia over the crisis in Ukraine.