Kiev Behind Malaysian Flight Shoot Down? Was Ukraine’s Ministry of Interior behind the Downing of Malaysian Airlines MH17? A division of Buk missile systems of the Ukrainian Armed Forces was, according to Pravda, deployed to the Donetsk Oblast on July 15, two days before the downing of the Malaysian airlines MH17 flight. The Buk missile system has the capabilities of downing an aircraft flying at 35,000 feet.

While the Pravda report remains to be confirmed, Russian Defense sources confirm the presence of several missile batteries in the Donesk oblast operated by the Ukraine armed forces:

‘The Ukrainian military has several batteries of Buk surface-to-air missile systems with at least 27 launchers, capable of bringing down high-flying jets, in the Donetsk region where the Malaysian passenger plane crashed, Russian Defense Ministry said”(RT, July 17, 2014) 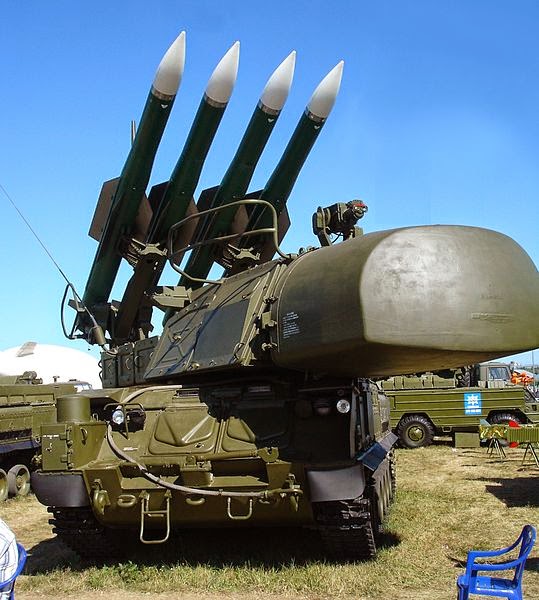 Of significance, the Prosecutor General of Ukraine Vitaliy Yarema confirmed that the Donesk rebels do not have Buk or S 300 ground to air missiles which could have downed the plane.

Yarema also confirmed that according to military sources:

“After the passenger airliner was downed, the military reported to the president that terrorists do not have our air defense missile systems Buk and S-300,” (quoted by Itar-Tass).

This disclaimer is pro forma. It comes from official sources and can easily be reversed at a later date as part of the propaganda campaign directed against the Donbass rebels.

Yet what appears to be contradictory in these various statements is that immediately after the downing of MH17, an adviser to the Ukrainian Minister of Internal Affairs Mr. Anton Gerashchenko stated categorically that the Malaysia Airlines Boeing 777 MH17:

According to the Ukraine Interfax News Agency Anton Gerashchenko, “said on Facebook that the plane was flying at an altitude of 33,000 feet when it was hit by a missile fired from a Buk launcher.” According to the Strait Times:

Mr Gerashchenko was quoted as saying: “A civilian airliner travelling from Amsterdam to Kuala Lumpur has just been shot down by a Buk anti-aircraft system… 280 passengers and 15 crew have been killed.”

How could he have known what type of missile system had brought down the plane?  His statement contradicts that of the Ukrainian military.

How could he have been privy to this information of a military nature prior to the conduct of an investigation on the ground? Unless the Ministry of the Interior  was directly involved.

It should be noted that the Ministry of Interior, largely under the control of  the two Neo-Nazi parties Svoboda and Right Sector is responsible for “internal” military operations directed against rebel forces in Lugansk and Donbass, in coordination with the Armed Forces. The Ministry oversees both The Interior Troops of Ukraine (Внутрішні війська України, Vnutrisni Viys’ka Ukrayiny (VVU )) as well the National Guard (integrated by Right Sector militia).

According to the controversial report of the Spanish air controller at Kiev Borisol airport  there was an unexplained change of course of the Malaysian MH17 flight which took the aircraft directly over the Eastern Ukraine warzone.

The Spanish air controller intimates that the order to down the aircraft came from the Ministry of the Interior (Ministry of Internal Affairs) and not from the Military.

He also said that the MH17 flight was escorted by Ukrainian fighter jets minutes before it was downed.

“The fighters flew close to 777, up to 3 minutes before disappearing from the radar, just 3 minutes”

It is worth noting that the presence of the Ukraine fighter jets reported by the Spanish air traffic controller was confirmed by eyewitness reports in the Donetsk region.

What is of significance is that the announcement of the downing of the aircraft (by a missile) by Kiev was almost immediate.

According to the Spanish air controller, the air control tower was informed of the downing of the aircraft at 12.00 hours, approximately ten minutes after it disappeared from the radar screen (11.50 hours). How could they have known unless they had concrete details on how it was shot down?

“Malaysia Airlines B777 plane just disappeared [from the radar] and Kiev military authority informed us of the downing, How they knew?”

According to air traffic controller, the information did not emanate from the Ministry of Defense:

“Interior Minister knew what the fighters were doing in the area, the defense minister didn’t.”

“Members of the Military confirm. It was Ukraine, but still do not know where the order came from”

The Spanish air traffic controller intimates that there were members of the military who were taking orders from the Ministry of the Interior:

“The military under the orders of Interior Minister knew what happened all the time .”

“Military commanders here (ATC) control tower, confirm that the missile is from the Ukrainian army,”

Despite Washington’s accusations, pointing a finger at Russia and the “pro-Russian rebels”, the facts point to The Ministry of Interior’s VVU.

From official statements one has the distinct impression that there are profound divisions both within the government and the Ukraine Armed Forces as well as between various factions within the military.

The truth is being suppressed.  The Spanish Air Traffic Controller has the object of death threats. He and his family were deported from Ukraine on orders of the Kiev regime.

Below we indicate relevant sections of the Spanish Air Traffic Controller’s Twitter messages:

The B777 plane flew escorted by Ukraine jet fighter until 2 minutes before disappearing from the radar,

“Malaysia Airlines B777 plane just disappeared and Kiev military authority informed us of the downing, How they knew?”

“7:00 minutes after [plane disappeared], the downing was notified, later our tower was taken with foreigner staff, they still here ”

“all this is gathered in radars, to the unbelieving, shot down by kiev, here we know it and military air traffic control also”

“Interior Minister knew what the fighters were doing in the area, the defense minister didn’t.”

“Members of the Military confirm It was Ukraine, but still does not know where the order came from”

“Days ago I said here, kiev military wanted to rise against the current president, this may be a way, ordered by timoshenko [following timishenko orders]”

“The fighters flew close to 777, up to 3 minutes before disappearing from the radar, just 3 minutes”

“Government has the official report signed by the control military authorities in Kiev,,,, [plane] shot down”

“The report indicates where the missile had come out [from], and specified is not from the selfdefence in rebel areas”

“military high command did not gave the order to fire the missile, someone screw it ine the name of ukraine”

“The military under the orders of Interior Minister knew what happened all the time .”

“Military commanders here (ATC) control tower, confirm that the missile is from the ukranian army,”