by Patrick Martin and Barry Grey

Patrick Martin and Barry Grey writes: At least 100 Palestinians were killed Sunday as Israel escalated its savage land, sea and air attack on Gaza. In a single neighborhood on the east side of Gaza City, Shejaiya, Israeli bombs and artillery shells killed at least 62 people and wounded nearly 300 others. Among the dead were 17 women, 14 children and four elderly people. The corpses of women and children lined the streets of Shejaiya as people fled on foot and in overloaded vehicles. 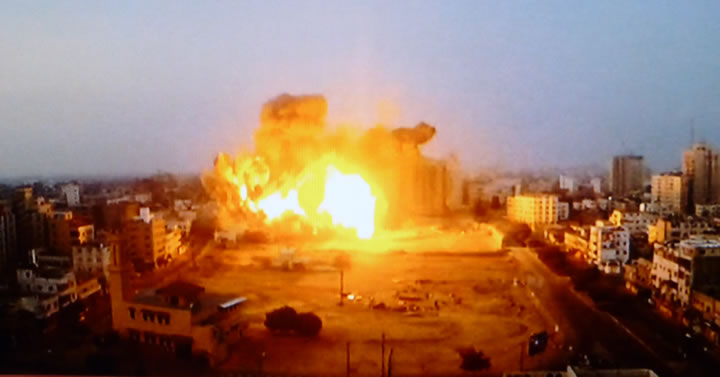 The United Nations agency for Palestinian refugees, UNRWA, said more than 63,000 people had sought sanctuary in the 49 shelters it has set up in Gaza. “The number has tripled in the last three days,” UNRWA said, “reflecting the intensity of the conflict and the inordinate threats the fighting is posing to civilians.”

Hospitals in Gaza were overwhelmed by the wounded and other civilians seeking sanctuary from the relentless bombardment. Supplies of bandages and basic medicines were running out. In large parts of the besieged territory, water and electricity were cut off.

The Israeli military defended its use of flechette shells against the Palestinian population, saying it was permitted under the laws of war. Flechette shells spray out thousands of tiny metal darts with sharpened tips, designed to shred human flesh.

The Israeli state is carrying out mass murder in Gaza. Its troops, tanks, war planes and gunboats are perpetrating a massacre of defenseless Palestinians trapped inside a tiny, impoverished and densely populated territory. No one really knows how many have been killed in the two weeks of Israeli bombing and shelling. But Palestinian hospital officials as of mid-day Sunday put the figure at 436, with more than 3,000 wounded. The dead include more than 100 children.

If this is not a war crime, then what is?

The lies given out by Israeli Prime Minister Netanyahu to justify this atrocity are beneath contempt. People are told not to believe what they are seeing with their own eyes in news reports and videos, despite the grossly distorted, pro-Israeli coverage provided by most of the corporate-controlled media. Israeli officials have the temerity to claim that their actions are a defensive response to aggression from Hamas. But the facts speak for themselves: the civilian death toll is heading rapidly toward 1,000 on the Palestinian side, while only two Israeli civilians have died as a result of Hamas’ crude rockets.

The measures taken by Hamas are the defensive response of an isolated and besieged people to a savage onslaught, the culmination of decades of unrelenting and ever-escalating Israeli violence. Nearly fifty years after the Six Day War and seizure of the occupied territories, the Zionist regime has utterly failed to crush the resistance of the Palestinian masses. The current paroxysm of violence is an expression of desperation rather than confidence in the future. For all its cynicism and brutality, the Israeli government gives the impression of a regime that has lost its bearings.

In its long and bloody history, Israel in the past four days has crossed a fundamental line. Its actions in Gaza are those of a society in a state of political and moral disintegration—the result of the dead end of Zionism.

It is now clear that the murder two weeks ago of 16-year-old Muhammad Khdeir in East Jerusalem by Jewish fascists, who poured gasoline down the youth’s throat and set him on fire, was only the precursor to a far broader crime, carried out by the highest authorities of the Israeli state.

More and more, Israel is looked upon around the world as a pariah state run by a combination of fascists and lunatics. Outrage against it is mounting among working people and youth internationally.

Israel could not carry out such a naked crime without the support, political and material, of the imperialist powers and capitalist governments around the world. The world is witnessing a globally orchestrated war crime, carried out with the enthusiastic and open support of the international capitalist class.

First and foremost is the United States, which has supplied Israel with the bulk of the weapons it is using to murder Palestinians. Last Wednesday, on the eve of Israel’s ground invasion, President Barack Obama appeared before the press in the White House and gave Israel his full support for the impending bloodbath.

Obama did not even bother to mouth the usual clichés about “restraint” and “limiting casualties.” Instead, he repeated verbatim the lying Israeli line, declaring, “There’s no country on earth that can be expected to live under a daily barrage of rockets.” This was said as Israeli missiles and bombs were killing Palestinians every hour.

He then blamed Hamas for “prolonging the conflict” by refusing to accept a phony ceasefire that was, in fact, a demand for abject surrender made for the purpose of creating a pretext for launching a ground war.

Interviewed Sunday on ABC Television’s “This Week” program, US Secretary of State John Kerry was asked to respond to the statement by Palestinian spokeswoman Hanan Ashrawi that what was happening in Gaza was a “massacre” and “war crime.” Kerry dismissed the charge as “Hamas rhetoric” and added cynically, “War is ugly and bad things are going to happen.”

Kerry knows full well that he is lying when he defends the Israeli onslaught on Gaza. His cynicism and duplicity were exposed on the “Fox News Sunday” interview program when the moderator played a clip of Kerry holding a cell phone conversation just before he went on air. Speaking of the Israeli bombardment of Gaza, he said sarcastically, “It’s a hell of a pinpoint operation… We’ve got to get over there.”

Then there are the European powers, all of whom are giving Israel their full support. The Socialist Party government of France has gone so far as to ban demonstrations against the Israeli onslaught on Gaza and mobilize riot police to attack protesters in Paris with tear gas.

The United Nations, as always, has fallen into line with the wishes of the major imperialist powers, calling on “both sides” to refrain from violence, in what is a completely one-sided slaughter.

The Arab bourgeois regimes are either openly or tacitly collaborating with Israel in the attack on Gaza. The US-client regime headed by the military butcher El Sisi in Egypt has sealed the border to prevent Gazans from fleeing the Israeli military and finding sanctuary in Egypt. El Sisi brokered the bogus ceasefire proposal to provide a pretext for the Israeli ground assault.

The Palestinian Authority of Mahmoud Abbas is doing the dirty work for the Zionist state and US imperialism, conspiring against Hamas while suppressing anti-Israeli protests on the West Bank.

There is nothing left of the myth of Arab nationalism and unity. All of the bourgeois regimes and parties have been exposed as petty agents of imperialism.

Hamas is exhibiting undoubted courage in seeking to resist the murderous Israeli offensive. But it does not have a viable political perspective. Based on nationalism, it seeks the support of Arab regimes that are completely subordinated to the imperialist powers, leaving the Palestinian masses isolated and virtually defenseless.

The homicidal violence in Gaza that is being aided and abetted by governments around the world is a warning to the working class of every country. It is proof of the complete ruthlessness of imperialism. It will not shrink from any crime to eliminate whatever gets in the way of its global economic and geo-political ambitions.

The defense of the Palestinian people is the task of the international working class. Israeli workers, in the first instance, must separate themselves from the criminals who run their country. Large sections of the Israeli ruling class are implicated in vile crimes. And there are voices within the Israeli establishment who are openly talking about the physical extermination of the Palestinian people—a Nazi-like “final solution.”

The Jewish workers must oppose the slaughter in Gaza. They must turn to their natural allies, the Arab workers and oppressed masses.

The American, European and international working class must give a lead to the widespread outrage and revulsion felt by millions over what is taking place in Gaza. It must demand an immediate halt to the carnage. Demonstrations of protest and solidarity with the Palestinians must be called in every country.

The demand must be raised to hold accountable the war criminals in Tel Aviv and their accomplices in Washington and every other capital around the world. The struggle must be directed not only against the Israeli government, but against the imperialist and capitalist governments that facilitate its crimes.