Hands down, Obama is the worst president since WWII: poll 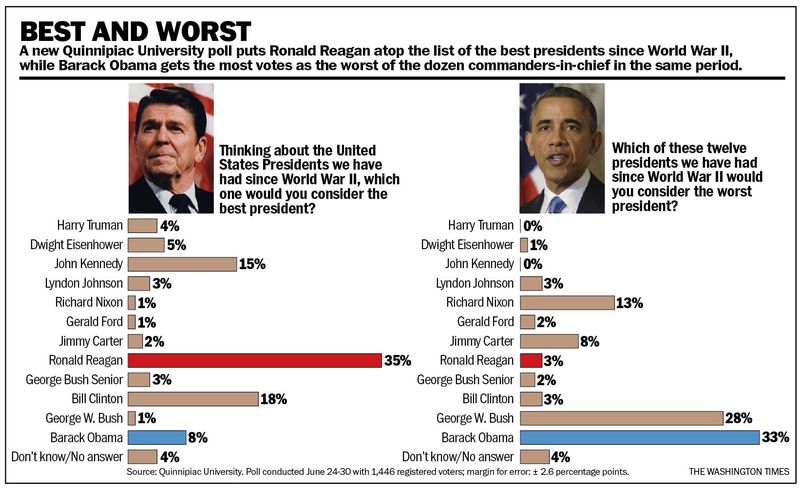 By Dave Boyer and Stephen Dinan

With Mr. Obama deploying troops to Iraq, failing to find compromise with Congress and seeing major defeats in the Supreme Court, voters continue to sour on him. The new poll also revealed that more voters now say GOP nominee Mitt Romney would have been a better choice in 2012.

Quinnipiac found 45 percent of voters say the country would have been better off if Mr. Romney had been elected, while just 38 percent say Mr. Obama remains a better choice. Even Democrats aren’t so sure — just 74 percent of them told the pollsters Mr. Obama was clearly the better pick in the last election.

Voters also rated the man who swept into office in 2009 with a promise of “hope and change” as worse than even his predecessor, Republican President George W. Bush, who left office with terrible approval ratings.

“Over the span of 69 years of American history and 12 presidencies, President Barack Obama finds himself with President George W. Bush at the bottom of the popularity barrel,” said Tim Malloy, assistant director of the Quinnipiac University Poll.

Nearly half of voters told the Zogby poll that Mr. Obama is “unable to lead the country.”

SEE ALSO: CURL: Obama is the worst president ever

“There’s no doubt the president has the leadership and stature necessary to call upon the American public to rally around the kinds of ideas that are in the best interests of the country,” he said.

But in his sixth year in office, Mr. Obama has turned increasingly to executive action to attack his policy goals, thereby mocking congressional Republicans for failing to work with him. On Tuesday, he ridiculed GOP efforts to rein in his executive powers with the threat of a lawsuit.

“As long as they’re doing nothing, I’m not going to apologize for trying to do something,” Mr. Obama said.

The president said this week that Americans are “extraordinarily cynical about Washington right now,” and the Quinnipiac survey shows that assessment is hurting Mr. Obama. A full 54 percent of voters believe the Obama administration is not competent at doing its primary job of running the government.

On overall job approval, Mr. Obama is upside-down by 13 points, with only 40 percent approving and 53 percent disapproving. That’s a 5 point slide since April.

As much as voters are down on President Obama, the star of former President Ronald Reagan continues to soar. The two-term California Republican was rated as the best of the 12 presidents who have served since Franklin Delano Roosevelt by 35 percent of the voters polled by Quinnipiac, just short of twice the number of second-place Bill Clinton at 18 percent. John Kennedy came in third in the “best category” at 15 percent and Mr. Obama was fourth at 8 percent. No other chief executive got above 5 percent support.

Just 3 percent of the Quinnipiac respondents rated Reagan as the worst of the 12 chief executives.