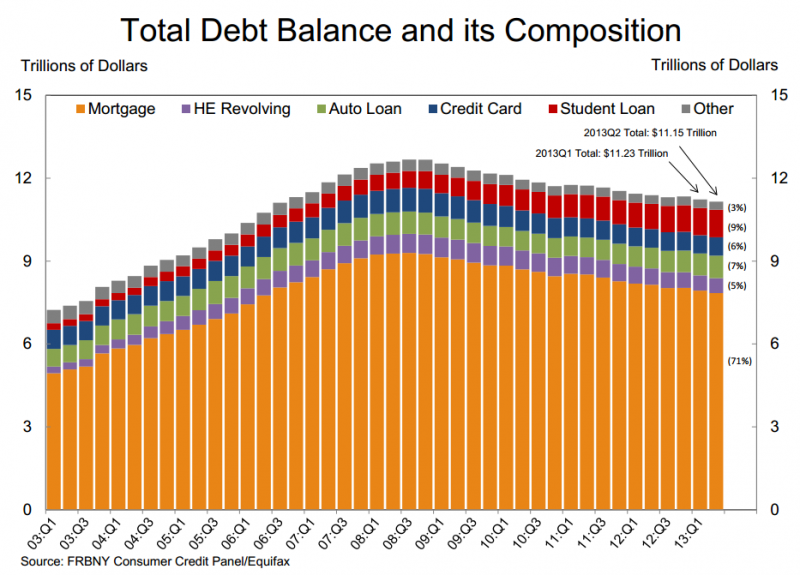 We have been warning for years that as a result of the Fed’s disastrous policies, America’s middle class is being disintegrated and US adults are surviving only thanks to insurmountable debtloads. But not even we had an appreciation of how serious the problem truly was. We now know, and it is a shocker: according to new research by the Urban Institute, about 77 million Americans have a debt in collections.

The breakdown by region:

As the Washington Post reports, that amounts to 35 percent of consumers with credit files or data reported to a major credit bureau, according to the study released Tuesday by the Urban Institute and Encore Capital Group’s Consumer Credit Research Institute. “It’s a stunning number,” said Caroline Ratcliffe, senior fellow at the Urban Institute and author of the report. “And it threads through nearly all communities.”

The report analyzed 2013 credit data from TransUnion to calculate how many Americans were falling behind on their bills. It looked at how many people had non-mortgage bills, such as credit card bills, child support payments and medical bills, that are so past due that the account has since been closed and placed in collections.

Researchers relied on a random sample of 7 million people with data reported to the credit bureaus in 2013 to estimate what share of the 220 million Americans with credit files have debts in collection. About 22 million low-income adults who did not have credit files were not represented in the study.

While we understand why someone owing tens if not hundreds of thousands can just do what the US government does so well, and simply decide to stop paying their debt (if unlike the government, without the option to roll it), what is scary is that there are people who are in collection on amount as tiny as $25.

The debts sent to collections ranged from $25 on the low end and to more than $125,000 on the high end. Many consumers were burned for relatively small amounts — about 10 percent of the debts were smaller than $125, Ratcliffe says. But the median debt, $1,350, is still pretty substantial, she adds.

The geographic breakdown is not surprising, headed by the state that hosts Las Vegas, where an unprecedented 47% of all consumers have debt in some stage of collection.

Nevada was hit the hardest, with 47 percent of consumers with a credit file showing a debt in collections — a mark researchers said may stem from the housing crisis when people struggling to keep up with their mortgage payments may have fallen behind on other financial obligations.

It’s not just Nevada. It’s, well, everywhere else too:

In 12 states, including the District of Columbia, more than 40 percent of residents with a credit file have a bill in collections. That includes Alabama, Arkansas, Florida, Georgia, Kentucky, Louisiana, Mississippi, New Mexico, North Carolina, South Carolina, Texas, and West Virginia.

But how is it possible that tens of millions of Americans are in such dire straits? After all, banks have been reporting better delinquency data for years. The answer: the study found that the share of people with debt past due, meaning they are at least 30 days late with payment on a non-mortgage debt, was much smaller: 1 in 20 people. That includes people who are late with credit card bills, student loan payments and auto loans. The majority of those people, 79 percent, also had debt in collections. However, because certain bills, such as medical bills and parking tickets, may not show up on a person’s credit score until they are sent to collections, the total share of people falling behind on their bills may actually be much higher.

And the breakdown by state: the stunner, again, is that the share of Americans with debt in collections is 7 times greater than those with merely debt past due:

The report’s punchline, via AP:

The Urban Institute’s Ratcliffe said that stagnant incomes are key to why some parts of the country are struggling to repay their debt.

Wages have barely kept up with inflation during the five-year recovery, according to Labor Department figures. And a separate measure by Wells Fargo found that after-tax income fell for the bottom 20 percent of earners during the same period.

But.. recovery? And consumer confidence at 2007 highs? Or did the Conference Board decide to just poll the residents of 15 CPW and 740 Park?

Of course, there is a simple solution to all of the above: instead of being deadbeats, if only these 77 million Americans had BTFD as the the S&P’s chief market valuation officer, Janet Yellen and Ben Bernanke before her, had advised them, then the US would truly be a crony capitalist-cum-socialist nirvana by now. Sadly, the way it is right now, the US Department of Truth will have to put this record number of deadbeats out of the labor pool (and hook them to the government handouts machine), while pretending that what once used to be known as the economy, and now is nothing but pure propaganda, is getting “better.”