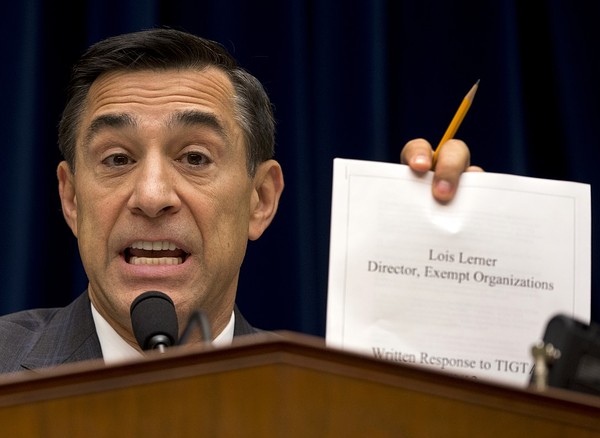 Rep. Darrell Issa slammed President Barack Obama for his inaction on the IRS targeting scandal, charging that Obama’s response might as well be, “When the IRS does it, that means that it is not illegal.”

“When Americans are abused by a powerful agency like the IRS . . . one would expect the president of the United States to be outraged,” the California Republican said in an op-ed piece on Monday in The Times of San Diego. “Instead, President Obama declared that there is not a ‘smidgen of corruption.'”

Obama made that comment to Fox News in an interview before the Super Bowl in February in response to queries about the IRS’ targeting of conservative, tea party and religious groups between 2010 and the 2012 presidential election.

Lerner, who retired from the IRS last year, directed the unit that screened the applications. She was held in contempt of Congress for refusing to testify before Issa’s panel, the House Oversight and Government Reform Committee.

Among the groups singled out by the Internal Revenue Service for special scrutiny in their applications for tax-exempt status were True the Vote, the Houston voter-rights group, and Crossroads Grassroots Policy Strategies, a nonprofit advised by Republican strategist Karl Rove.

Issa’s panel is among three congressional committees investigating the IRS scandal, which includes the loss of more than two years’ worth of Lerner’s emails because the hard drive had crashed and was later recycled.

Issa also blasted the Federal Election Commission on Monday because the agency recycled the hard drive of one of one of Lerner’s former employees. Those emails, which also were being sought in connection with the committee’s investigation, have also gone missing.

“We have a government of laws,” Issa said in the op-ed. “The rule of law must guide our bureaucracy down to the last email.

“No matter where you fall on the political spectrum, the IRS targeting scandal should disturb you,” he added. “The IRS is not a political tool to be used to the advantage of the party in power.

“Interactions with the bureaucracy should always be apolitical,” Issa said. “Every individual, family, and group deserves equal treatment when it comes to surrendering part of their income and sensitive information to the government.”