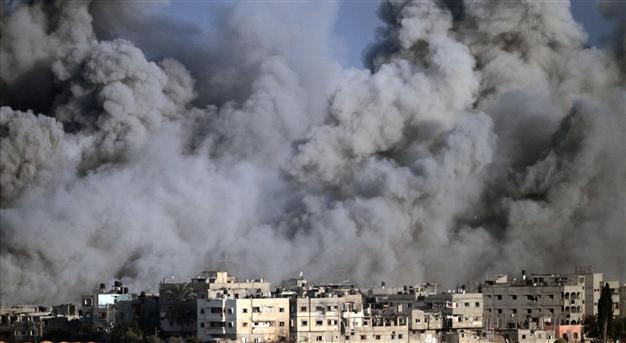 The United States was the only country in the world that voted Wednesday against the United Nations investigating human rights violations in Gaza unleashed by Israel’s military assault.

Of the 47 members of the UN Human Rights Council, 29 nations voted to set up a commission to launch an international, independent inquiry, effectively passing the resolution. Seventeen countries abstained, including Germany, France, and the United Kingdom.

U.S. ambassador to the Council, Keith Harper, said he issued the “no” vote because the resolution is a “biased and political instrument” that “will not help” the “cessation of hostilities.”

But Josh Ruebner, policy director for the U.S. Campaign to End the Israeli Occupation, toldCommon Dreams that the U.S. vote simply “shows the great extent to which the U.S. goes to protect Israel in international forums from any accountability for its actions, no matter how egregious.” Ruebner added that U.S. claims of imbalance are illegitimate, as the inquiry will investigate human rights violations perpetrated by Hamas as well as Israel.

Phyllis Bennis, senior fellow at Institute for Policy Studies, told Common Dreams that the U.S. “no” vote is part of a larger pattern. “The U.S. is the reason why the United Nations is not able to play the role its charter requires, which is to stop the scourge of war,” said Bennis. “The U.S. vetoes and threatens to veto in the Security Council, and in arenas like the General Assembly or Human Rights Council where there is no veto, they threaten other countries.”

The UN resolution comes amid an ever-rising Palestinian death toll, with Gaza Health Ministry official Ashraf al-Qudra reporting Thursday that so far 784 Palestinians have been killed and over 5,000 wounded in Israel’s “Protective Edge” operation. Kyung-Wha Kang, Assistant Secretary-General for Humanitarian Affairs and UN Deputy Emergency Relief Coordinator, estimates that 74 percent of the Palestinians killed are civilians and one-third are children. “One child has been killed each hour in Gaza over the past two days,” Kang said on Wednesday, according to the UN.

Israel launched air strikes on Palestinians seeking shelter in a UN school in Beit Hanoun in Gaza on Thursday, killing at least 15 people and wounding dozens. The attack marked at least the fourth time a UN facility in Gaza has been hit since July 8, according to the Guardian. Chris Gunness, spokesperson for the UN Relief and Works Agency, said on Twitter that “Precise co-ordinates of the UNRWA shelter in Beit Hanoun had been formally given to the Israeli army.”

Rubner expressed concern that the U.S. is likely to obstruct any attempt on the part of the Council to hold Israel accountable for war crimes: “What’s likely to happen is same thing with the Goldstone Report and the Human Rights Council inquiry into the attack on the aid flotilla: reports will document the fact that Israel has committed war crimes and crimes against humanity, and the U.S. will use its veto power or threat thereof to prevent the international community from acting on recommendations for accountability.”