Even the U.S. Congress is pushing regime change in Venezuela 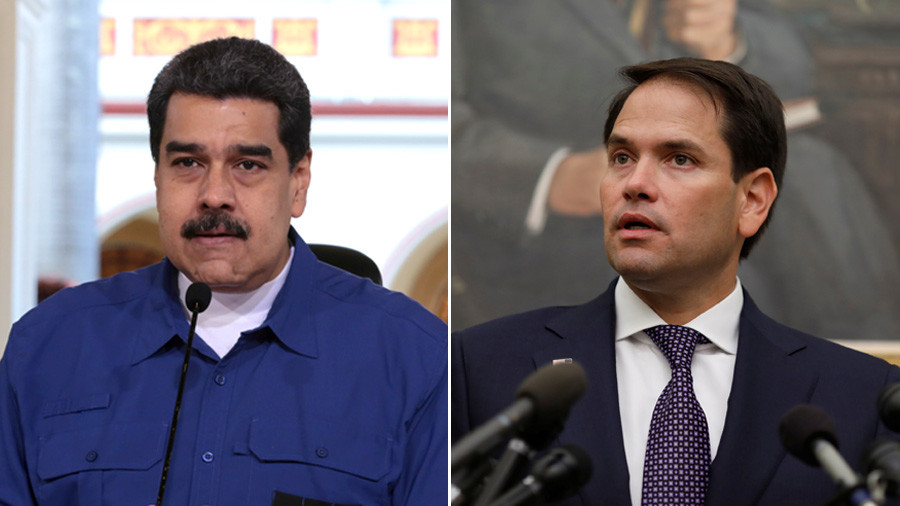 Even the U.S. Congress is pushing regime change in Venezuela

Predictably during a Senate Foreign Relations Committee hearing on Thursday, Republican chairman Marco Rubio condemned Venezuela’s Maduro as a “clear danger” and a “threat to the national security of the US.” To be expected the hearing was filled with plenty of threats and talk of flipping “military elites” and enforcing tougher sanctions.

But perhaps unexpected was just how out in the open and brazen Rubio’s own admissions of how far he’s willing to go in promoting regime change in Caracas. In public testimony he called on the US to promote “widespreadunrest” in order to eventually bring down the Maduro government.

It appears Rubio is now urging the White House to initiate a full-on “Syria option” for Venezuela, which implies covert arming, funding, and militarization of the opposition to reach peak escalation and confrontation with the government, perhaps inviting broader external military intervention, similar to efforts to topple Syria’s Assad over the past years.

We’ve commented before about how popular anti-Maduro protests seemed to have lost significant momentum of late, pretty much fading out altogether over the past couple weeks, after tensions came to a head on Feb. 23 when US-backed opposition leader Juan Guaido led a failed attempt to get an unauthorized humanitarian aid convoy across the Colombian-Venezuelan border.

This as it appeared the opposition was itching for a provocation that might draw the US and regional allies into some of kind of more direct intervention, and as a significant uptick in US military flights went to and from Colombia near the border with Venezuela.

At Senate hearing on Venezuela just now, Marco Rubio called for the US to promote “widespread unrest” (violent guarimba riots) as a means of encouraging regime change. His proposal was met with approval. https://t.co/PDBCNoi4Q5 pic.twitter.com/OIEk0K0O7G

During Thursday’s Senate hearing, there appeared a willingness to admit the fact that it appears Maduro is not going anywhere anytime soon, for example, when the committee’s top Democrat, Sen. Bob Menendez of New Jersey, said, “Confronting tyranny requires sustained commitment. But Maduro is not invincible. He’s far from it.”

Though issuing plenty of threats of tighter sanctions and strangling Venezuelan oil exports, the Democrats on the committee stopped short of endorsing military action: “The support that we have lent unequivocally on Venezuela does not include the use of force,” Menendez said further.

At Senate hearing on Venezuela just now, Marco Rubio called for the US to promote “widespread unrest” as a means of encouraging regime change. His proposal was met with approval.

Blumenthal noted this was a reference to instigating further “violent guarimba riots” — referencing the local Spanish word — that have been a feature of Venezuelan city streets since Maduro was sworn in for a second six year term in January, and which has further represented the more violent side of Venezuelan politics for years.

Journalist Clifton Ross, who has long reported from on the ground in Venezuela, explained the term as follows:

Your Spanish lesson for the day is guarimba, (feminine, as in ‘me voy a la guarimba’ I’m going to the guarimba) the blocking of roads, lighting of tires, and sometimes involving defensive acts of rock-throwing, a practice adopted by the Venezuelan opposition in response to elections they feel are unfair. Those who participate in the guarimbasare known as guarimberos. It is presently the season of guarimbas, and one can only hope, for the sake of the nation, that they will soon come to an end.

Though Maduro has survived the latest round of international pressure to succumb to internal coup efforts led by a US-supported opposition, the fires of unrest Venezuela don’t look to be extinguishable anytime soon.

As Ben Norton also pointed out on Thursday while speaking of using “humanitarian aid” as a pretext for regime change: “They’re not even hiding it at this point.”

They're not even hiding it at this point: Venezuela's US-backed neoliberal opposition leader Antonio Ledezma is openly admitting the strategy is to falsely claim Venezuela needs "humanitarian intervention" on "R2P" grounds, just like Yugoslavia and Libyahttps://t.co/lh8wuMwnIg

Indeed, Rubio personally promised just this during hearing: “To those in Venezuela: Your fight for freedom and restoration of democracy is our fight, and the free world has not and will not forget you,” he said, and added, “We [the United States] will be [focused] on this as long as it takes.” Earlier in the day Rubio told Fox News that:

“Trump won’t give up until Maduro is gone in Venezuela.”

More ominously, Rubio predicted during the hearing, “Venezuela is going to enter a period of suffering no nation in our hemisphere has confronted in modern history,” in reference to the Venezuelan military blocking US aid shipments and tightening sanctions.

Of course Rubio laid all blame for the dire future plight of common Venezuelans on the Maduro regime alone, and not on his own admitted desire to stir yet more unrest in the country.