Taking the art of fake news to new heights, a non-profit has circulated mock Washington Post issues near the White House, telling readers that President Donald Trump fled to Crimea on the back of women-led protests.

Activists giving out fake copies of the Washington Post commuters were spotted near the White House on Wednesday morning. Vigilant readers immediately alerted the newspaper, which said that the copies, dated May 1, 2019, were “not Post products” and that it was “looking into this.” 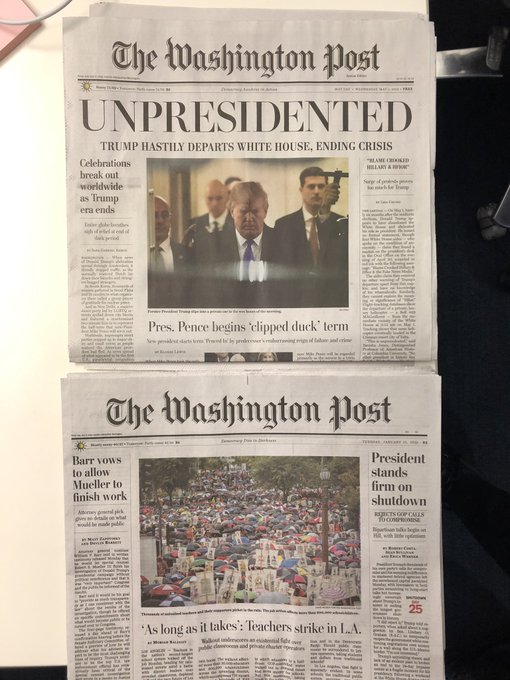 The fake copies include an eye-catching headline for the lead story: “UNPRESIDENTED. Ending Crisis, Trump Hastily Departs White House,” complete with a picture of a glum Trump on his way to “slip in a private car in the wee hours of the morning.”

The paper “reports” that Trump abruptly left his office at 3:15am on May 1, leaving a message on a napkin in the Oval Office that blamed “crooked Hillary,” the mysterious “Hfior,” and “the Fake News Media” for his flight. The report, meticulously mimicking the Washington Post’s source-based reporting style, cites “four White House aides” speaking on condition of anonymity, that they found the napkin two days before events took a dramatic turn.

Trump’s fictional resignation and the subsequent swearing-in of Vice President Mike Pence, who instantly promises to keep as low a profile as possible, comes amidst “massive protests” staged by a grassroots movement with #MeToo as its backbone.

The news of Trump’s resignation sparks a wave of celebrations across the globe, with European countries refusing to shelter him. The creators of the fake diligently stick to the Washington Post’s style, fanning the Russia collusion narrative just like their prototype by sending Trump to seek safe haven in Russia – namely, Crimea.

While there has been speculation that radical liberal political activist group MoveOn or CODEPINK, a women-led grassroots NGO, might be behind the stunt since they promoted the action, later in the day, The Yes Men, a progressive non-profit group, claimed responsibility in a press release.

“The story this paper tells is more reasonable than our current reality,” it cited one of the authors of the “report,”Onnesha Roychoudhuri, as saying. Co-author L.A. Kauffman argued that the fake is “anything but far-fetched” and “offers a blueprint to help us reclaim our democracy.”

Apart from the printed editions, the group made the paper available online at my-washingtonpost.com/ and democracyawakensinaction.org. In addition, it sent out emails from noreply@my-wahsingtonpost.com to notify readers.

While the actual Washington Post has distanced itself from the stunt, it later decided to play along, publishing an article referencing the one in the fake edition, telling about “The Bundle,” a set of 64 progressive bills aiming to make education free, guarantee employment, and make everyone eligible for Medicare.

While the anti-Trump crowd has generally applauded the action, it also drew backlash, with many pointing out there is too much fake news around to churn out more, even accusing the Washington Post of playing along with Trump and Putin’s “authoritarian playbook.”

“This doesn’t help at all. We already have too much fake news floating around,” another wrote.

The Washington Post has been one of the favorite targets of Trump’s attacks on “fake news.” Last year, Trump’s trade adviser called the paper “fake news most of the time.”

The Yes Men co-founder Andy Bichlbaum defended the stunt, telling Wired it’s obvious that the websites and the copies are fake.

“If you look at the website, I think you might agree it would take someone very strange to spend much time believing it’s true,” he said.