1:56 AM | Posted by Illuminati Researcher 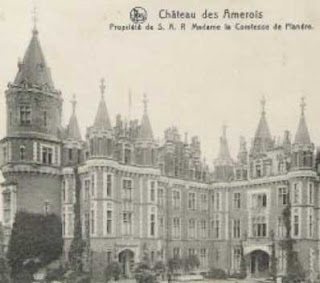 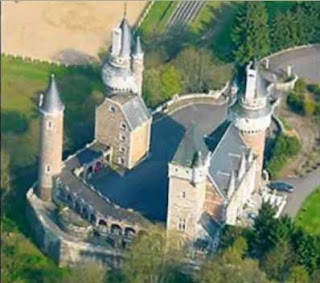 I guess I have an obsession with this castle, it appears that the owner does everything that they can to keep it invisible. Almost every image of it has been removed from the internet, as soon as a good video appears about it on Youtube it is aken down. The images here have been rescued from Google’s cache, the view of the castle on Google Maps is interesting, it appears as a nondescript blue blob. 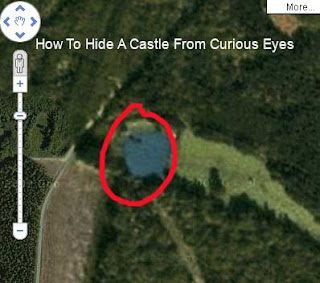 The images here have been rescued from Google’s cache, the view of the castle on Google Maps is interesting (see left), it appears as a nondescript blue blob.

I’ve discovered through research that the castle is owned by Solvay, the people who provide us with controversial antidepressant, for example Prozac and Paroxetine. Drugs wh ich have been held responsible for the spurge of mass killings being witnessed in schools and universities around the world. Solvay also provide Children’s camps across the globe and interestingly in Brussels. Would you trust these people to look after your child?

This article is interesting because Kate and Gerry McCann’s appeal for an alert system to assist in finding missing children was rejected and instead member states will set up their own systems and work together to alert border officials and foreign police forces more quickly following child abductions.

This is a nonsense, obviously the best system would be a centralized database which authorities could access in the advent of a missing child, thereby having immediate access to the data rather than decentralized systems which do not work together. I find it horrifying to discover that you have more chance of finding a missing car than a missing child. There is something is a bit fishy here isn’t there? Could it be that all these high profile individuals, Royal family members, politicians et al, do not want their perverse pedophilia games to end and they will do anything to enable their activities. 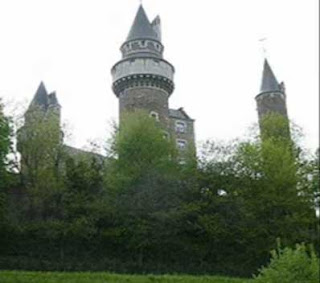 Look up the Detroux affair

BRUSSELS – In Belgium, the X-Files refer not to the U.S. television series but to a series of horrific witness accounts of an alleged pedophile network.
The five women and the male transvestite who testified anonymously in Belgium under the code-name ”X ” described an underworld of snuff movies and sadomasochist torture
that was almost impossible to believe. And they said that politicians and other highly
placed members of society were involved.

The conventional wisdom is that the witnesses were either deranged or were recounting
fantasies. It was, in the jargon of psychiatrists, a bad case of false-memory syndrome.

• But a new book by three crime reporters, ”The X-Files: What Belgium Was Not
Supposed to Know About the Dutroux Affair,” published in French and Dutch in
November, asserts that the X-witnesses were more credible than the conventional
wisdom suggests.

The cover up was so obvious that 300,000 Belgiums went to the streets to protest against the way the investigation was conducted. At least 3 families of the victims have been convinced there is a massive cover up and at least 20 crucial witness have ‘committed suicide’. It seems to be very hard to get access to these X-files. Maybe that has to do with the fact that many senior officials have been named as participants in the above crimes, including members of the royal family and at least one former European Commissioner (name hasn’t been made public). At the moment, I don’t see how Springmeier or Wheeler could have gained access to these secret hearings, but we’ll see where this story goes in the future. I’ll also check out the place the first time I’m getting near it. The chateau is not named in the usual lists of Belgium castles. Pictures and references are in very short supply. (It’s kept very well hidden
, just why is that? unless these people have something to hide!)

Chateau des Amerois The castle was owned by Prince Philipp von Saxe-Coburg-Gotha and later by the Solvay family. The Solvay family is one of the leading industrial families of Europe (producer of medicines, plastics, and chemicals like fluor). In their 1996 book, Fritz Springmeier and Cisco Wheeler (very unsure what to think of their information) referred to it as the ‘Mothers of Darkness castle’.

Documentation which indicates that The Solvay family still own the castle. See following Hunting permit:

This obscure castle does indeed exist and has been named in late 1996 and early 1997 by at least one ‘X’ survivor of the Dutroux affair as a place where nasty things happened. Different witnesses who described child torture, child rape, child molestation, child hunting, and child murder have been declared ‘mad’, but only after all the original investigators were suddenly replaced. There were also multiple claims of sex parties that were held in different castles. It didn’t matter that the witness accounts included many verifiable corroborative details and helped solve a couple of previous child murders.

Please do whatever research you can to expose this disgusting group of people, information appears everday about Satanic Ritual Abuse and everyday the information disappears, or get’s buried on the Internet. Set up some Google Alerts about the Mothers of Darkness castle and publish the information on your blog, before it get’s taken down.

Please comment on this blog, I could do with some help to expose these people.