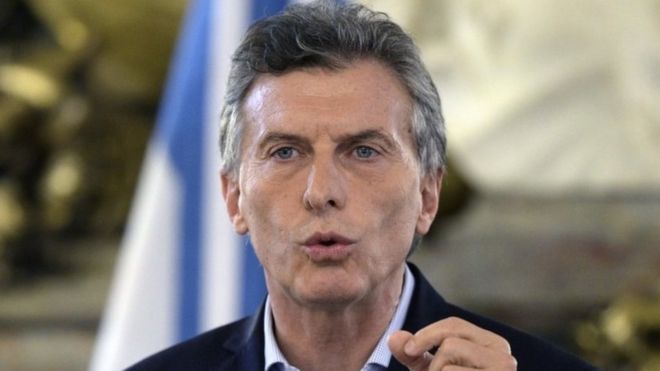 Argentine President Mauricio Macri has pledged to assert his innocence when he appears before a federal prosecutor on Friday to explain his finances.

An investigation began on Thursday after it transpired Mr Macri was mentioned in the Panama Papers, leaked files of law firm Mossack Fonseca.

Mr Macri said he would file a judicial “declaration of certainty” so the court can see he is telling the truth.

In a televised address, he vowed to prove he had done nothing wrong.

According to local media reports, the president was listed as director of an offshore company in the Bahamas.

He said he wanted to co-operate fully with any inquiry.

“I know there are some people concerned about these allegations in the Panama Papers that have come out and involve me,” he said.

“I want to say one more time that I am very calm, I have complied with the law, I have told the truth and I have nothing to hide.”

Mr Macri said that he had made clear in his initial declaration that he did not have any shares and did not receive any payment for acting as a director of offshore companies.

His office has insisted that he had no shares in the company in question and never received any income from it.

Argentina’s national tax authority and anti-corruption office will be asked to provide information to the inquiry.

More on the Panama Papers

La Nacion, one of the newspapers examining some of the leaked documents, reported that Mr Macri was listed as a director of Fleg Trading from 1998 until 2009.

On Tuesday, Mr Macri’s office confirmed that a business group owned by the president’s family had set up an offshore company through the law firm at the centre of the Panama Papers scandal.

But his office argued that because he had never received any income from it there had been no reason to mention it in the financial declarations.

Mr Macri campaigned on a promise to combat corruption.

Meanwhile, Panama’s vice-president and foreign minister, Isabel De Saint Malo, has defended her country, saying it had been unfairly singled out.

Speaking to the BBC, she said: “This publication has information on many jurisdictions, over twenty-one jurisdictions where banks are based – and not one bank is based in Panama…So this has made Panama in a wrong and bad way the focus of attention in the world.”

Panama Papers – tax havens of the rich and powerful exposed