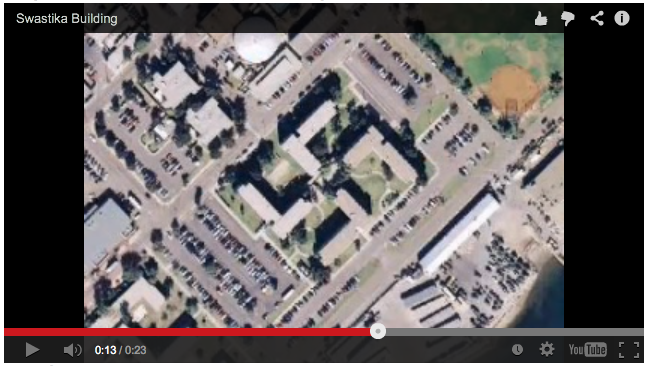 This article was first published in September 2007.

The story of the US Navy’s giant swastika-shaped barracks, built in the late 1960′s and located at the Naval Amphibious Base Coronado, just South of San Diego, has been all over the news. Rightly so – it’s the biggest government subsidized swastika display on Earth.

Below is a YouTube presentation – a simple silent slide show of clips taken of views, through Google Earth, that zoom in, from space, on the giant NAB swastika complex.

The US media has now deigned to make this story into a major media spectacle. But, media depictions you may have heard in the last 24 hours, on the origin of the giant swastika-barracks which houses Navy SEALS, will probably all amount to evasion, distortions, or even lies.

After Google Earth made the Navy’s giant government-subsidized swastika building complex, located at the Coronado Naval Amphibious Base near San Diego, visible to anyone on Earth, the resultant publicity, outcry, and mounting political pressure has led the US Navy to budget $600,000 to change the swastika shape of the barracks: to unmake the swastika, which according to the US Navy was the result of an embarrassing planning oversight.

CNN below, repeats the United States Navy’s claim that the NAB Swastika complex was accidental. But, that claim has been disproved, as detailed further in this post, by researcher Avrahaum Segol.

“There are two important questions attendant to this controversy.  The first is now that the issue is again on the front burner, what can or will be done to get rid of the swastika?  The second is how in the hell did a swastika design ever get there in the first place?….

World War II cost the lives of 318,274 U.S. service personnel—182,070 of them in the European theatre. These brave soldiers and sailors died fighting the people whose symbol inexplicably mocks their deaths from the grounds of a U.S. Naval Base.” – Donald H. Harrison, San Diego Jewish Times December 13, 2006

CNN’s  “Oops ! – gosh darn it…. accidental swastika !” explanation, offered as a joking commentary (as if a giant swastika building is funny) is both grotesque and also amounts, at best, to journalistic incompetence.

Thanks to the efforts of Israeli American researcher Avrahaum Segol,  much is known about the origin of the Navy’s enormous swastika shaped barracks complex, and the likelihood that the complex was “accidental” is close to zero. Evidence unearthed by Segol demonstrates, almost certainly, that the building complex was no “accident”…

To get another perspective on the sheer scale of the Coronado NAB swastika barracks, which houses Navy SEALS, let’s look at a Reuters news story:

Reuters did not discuss the building’s possible origin – how could such a thing have happened by ACCIDENT ?! But Reuters is to be commended – the news service did not, as did CNN newscasts, turn the giant swastika building into a joke. Unlike CNN, Reuters simply avoided the question of how the freakish Coronado NAB swastika complex came to be.

First of all, you should be aware of a bit of swastika history. The Nazis, of course, did not invent the swastika symbol, which has been used widely around the world for thousands of years.

But, the Nazis did appropriate the swastika symbol to make it their own. Swastika symbols are typically displayed upright, with the symbol resting flatly on one of the swastika arms. In contrast, the Nazi swastika is distinguished, most notably, because it is always rotated at 45% degrees off true North.

The Coronado NAB Amphibious base swastika is oriented at 45% degrees off true North, as a properly displayed Nazi swastika would be, and it rotates in the same direction as did the Nazi swastika.

Here is the US Navy’s official explanation on the origin of the Coronado swastika building complex. The following picture is an excerpt from a reply by Navy public affairs officer Steve Fiebingdated August 17, 2006, in response to a certified letter, sent by Dave vonKleist of The Power Hour, asking about the origin of the complex.

The United States Navy’s official explanation on the origin of the Coronado Swastika complex is contradicted by documents unearthed by Israeli-America researcher Avrahaum Segol.

Segol’s extensive research into the Coronado NAB swastika is part of a broader research project Segol has undertaken, to uncover, expose, and publicize what he describes as a widespread pattern of anti-Semitic (and also anti-Islamic) religious symbolism represented in United States government architecture built from the 1930′s through the 1960′s (and even, in at least one case perhaps, recently).

One central document obtained by Avrahaum Segol is a copy of  an architectural document submitted to the US Navy, by the architectural firm that designed the Coronado swastika complex, that was signed off on by US Navy Rear Admiral Robert R. Wooding [link to bios of US Navy personnel. Scroll down page for Wooding’s bio] on March 5, 1968.

According to Naval Public Affairs Officer Steve Fiebing [from letter excerpt above]:

“The original plans submitted to the Navy for the project included… a single “L”-shaped 3 story barracks. The plan called for the “L”-shaped dormitory building to be repeated three times and placed at 90-degree angles to the central buildings.”

Fiebing’s account suggests that Navy officials were shown a proposed architectural design of one “L”-shaped barracks with the additional instruction, probably written, that the “L”-shaped barracks was to be repeated three more times. But, the vicinity map obtained by Avrahaum Segol, that was signed off on March 5, 1968 by United States Rear Admiral Robert Reynolds Wooding, does not show a single “L” shaped building at all. It depicts four “L”-shaped buildings that form a swastika shape. Fiebing’s account is directly contradicted by the vicinity map Rear Admiral Wooding signed.

The US Navy’s official explanation, that the configuration of the building complex was not initially comprehended as forming a swastika shape, is also contradicted by an October 20, 1968 news story from the San Diego Union. Obtained by Avrahaum Segol, the news report seems to contradict the Navy’s account. As Segol notes, the San Diego Union story entitled “NAVY BARRACKS PROJECT STARTED IN CORONADO” includes the following decription of the project:

“CORONADO PROJECT:  Perspective by architectural firm of Hendrick and Mock shows a layout of four L-shaped buildings to provide housing for more than 1,000 men at the U.S. Navy Amphibious Base at Coronado.  The $2,350,000 project is scheduled for completion in July by the Reis Co.”

As an additional note, it would have been standard architectural practice, for a proposed project of such magnitude, to be rendered in a three dimensional model that would be shown to those commissioning the project: in this case the United States Navy.

Below is an excerpt from an email letter Segol sent in September 2007 to various United States government officials:

To:  Public Affairs Officer Kevin B. Dixon; and
The Senior Commanding Officer at NAB Coronado

cc:  Commander-In-Chief/President Of The United States Of America, Mr. George W. Bush;
Ambassador Jones [for Delivery Of This Disclosure To The Personal Attentions Of  President George W. Bush];
United States Chief Justice/Chancellor of The Smithsonian Institution, Mr. John G. Roberts, Jr.;
Senator Arlen Specter; For Himself and Distribution To Membership of Constitutional Judiciary and Appropriation Committees Upon Which He Sits;
Congressman John Conyers, Jr.; For Himself and Distribution To Membership of The Constitutional Judiciary Committee Which He Chairs;
All Interested Press and Parties Addressed:

Re: **NEW EVIDENCE OF NAVAL DECEIPT & CRIMINAL ACT OF MISINFORMATION;

The NAB Coronado Website continues to publish false facts and information as to the process followed in official planning, approval and construction of the Complex 320-325 designed as a Christian-NAZI Gammadion/Swastika.  The offensive structures remain.

In my last communications dated 18 Agust 2007 ce., written to the NAB Coronado Public Information Officer Kevin B. Dixon, I specifically requested that the offensive structures be immediately altered physically or actually demolished; and that the official NAB Coronado website explanation of Complex 320-325 be changed to reflect the truth of facts.

More than one full year’s effort has been spent by me to uncover and reveal the “truth of facts” surrounding the Navy’s official guilt and participant knowledge in planning, approval and construction of the offensive stucture defined by Complex 320-325.

The offensive structures remain.  The Website is not updated.

Now, NEW EVIDENCE in the form of an article published in the San Diego Union on date of “October 20, 1968″, long ago referred to in A Cold War Era Buildings Study and Supporting Form Report, alleged to be unavalaible/unattainable by the Navy’s Public Information Officer
has finally now been located and retrieved.

The cited San Diego Union article entitled,  NAVY BARRACKS PROJECT STARTED IN CORONADO, was published Sunday morning, on page 2 in Section F (Realty Round Up), “October 20, 1968″, and is attached hereto; as are the relevant above referred Cold War Buildings Study and the supporting Form Report, which documents respectively cite said “October 20, 1968″ San Diego Union article in footnotes “3″ [three] and “41″ [forty-one].

Information in the San Diego Union article makes picture clear that a Perspective rendered by Architect Firm of Hendrick and Mock displayed “… layout of four L-shaped buildings …”,
proving a Christian-NAZI Gammadion/Swastika to be visually recognizable at all times.

The illustrated architectural “Perspective”, seen depicted in the article, has a caption typed beneath it.  I quote:

” CORONADO PROJECT:  Perspective by architectural firm of Hendrick and Mock shows a layout of four L-shaped buildings to provide housing for more than 1,000 men at the U.S. Navy Amphibious Base at Coronado.  The $2,350,000 project is scheduled for completion in July by the Reis Co. ”
[emphasis added]

The United States Navy/United States Defense Department, and the designing Architectural Firm of HENDRICK & MOCK, acted with guilty knowledge to intentionally plan, and approve, and construct the Christian-NAZI Gammadion/Swastika signs and symbols representative of the world’s enemy.

Project plans were submitted to the United States Navy for approval by Architect John R. Mock, the senior partner in Hedricks and Mock, on date of “28 NOV 67″.  The project plans were “APPROVED” by the U.S.Navy/Department of Defense by signature of RADM Robert R. Wooding, CEC, USN on date of “MAR 5 1968″.  The construction of Building Complex 320-325 commenced in “1968″ and with intentions to be completed by July “1969″.

Please see attachments for the relevant Architectural & Landscape Plans seen in NAVFAC Drawing Numbers 1209896 and 1209904; and Cold War Era Buildings Study with Supporting Forms, which also refer in footnotes to the above cited San Diego Union article, published on “October 20, 1968″. Also please review my intentionally high lighted version of Lanscape Plans which provides a full definition of both the constructed Gammadion/Swastika and “SS” “curvilinear” walkway cleverly designed by Hendricks and Mock.

As a December 13, 2006 story in the San Diego Jewish Times described Segol’s efforts:

One reason that the story of the swastika complex is being addressed again is because of the persistence of  Avrahaum Segol, a Wisconsin-raised Israel resident who holds dual U.S.-Israel citizenship…

Besides the swastika on the Amphibious Base, Segol has been researching the Mount Soledad Cross controversy…

…[Segol] obtained the Vicinity Map, and passed it on to the Jewish Times, and it was he who has been in touch with numerous San Diego journalists, including Steve Price, who covered this issue on KFMB-TV.